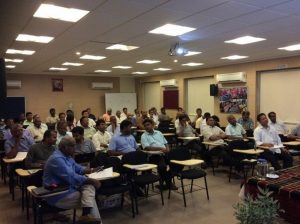 A two day meeting and animation of fifty five Salesians from South Asian region was held at the Salesian Provincial house, Mumbai from the – 31 October, 2016. The gathering brought together the twelve Youth Ministry Teams of the region under the umbrella of South Asia Youth Ministry led by the Delegate, Fr. MariaCharles.

Mumbai Provincial house with Fr. Glenford Lowe, the Rector of the community at the helm and Fr. Goyal Anthony with his administrative efficiency prepared the venue of the meeting and the hospitality arrangements to its best expression. Taking care of the minute details of the logistics, which despite the heavy schedule even found a slot for “Mumbai by night”, made the present meeting and the one that followed just excellent.

Fr. Godfrey D’Souza, the provincial of Mumbai presiding over the opening Eucharist reminded the participants, “We can lose our way in our work for the young, but God will find us”. In his inaugural address in the first session of the day he welcomed the participants and made the facilities and resources of the house at the disposal of the participants. We all felt truly, “Mumbai merihai.”

The key note address by Dr. Prof. Lata Narain, from the Centre for Lifelong Learning, TISS, Mumbai, gave a glimpse into the scenario of the situation of young people in the country. She highlighted the policy of the government by which it has broadly grouped the youth into two categories, 13 to 19 and 20 to 35, the former as adolescent group and the latter as a group moving towards forming an identity of its own.

Anyone working with young people should know this age grouping to tap into the resources available with the government. Later in the address she presented a bird’s eye view of the various movements in India starting from 1970s which caught the imagination of young people and got them involved. Presently, she said, the young people are caught up in the technology movement, wanting to know more: “Dil mange more”.

Whatever the category of the young one works for, she reminded the group, every category will have both themarginalized and the vulnerable. Post independent young people, though not involved in the struggle of the nation for freedom, still seek freedom from traditional life style, being placed under control, regular academic performances etc… They are in search of identity – national, ethnic and religious. She concluded exhorting the Salesians to create learning processes that would facilitate reflection and space for themselves.

The presentation of Prof. Lata served as a back drop for the sessions that ensued. The participants representing each dimension of the Youth Ministry Team met in their respective groups and collated the activities and planning of the year 2015-16. The occasion provided an opportunity for each to listen to the processes set in motion in the youth ministry of the provinces.

In order to facilitate the youth pastoral team with its strategic planning, Mr. Conrad Saldhana, a longtime friend of Salesians and management guru helped the participants to go through an experience of strategic planning. After introducing briefly the five steps of the planning process he asked the participants to engage individually in it. He then invited them to share the last step in the general session for common learning.

The dynamics of the planning process included group works and general assembly for presentation and sharing. This was also the space for each to listen to the success stories brought in from provinces and also to take home cues to reprogramme the approach of the province in Youth Ministry.

The two day meeting also provided space for the Youth Delegates of all the provinces of South Asia to give a short power point report of the youth ministry processes that are in place in the province. Innovative services and creative presence with the young were visibly seen in the South Asian Salesian youth ministry.

The two day programme on strategic planning concluded with the final session set aside to report back from group work zeroing in on two issues that need priority attention, proposing an important intervention in the lives of Salesians regarding Youth Ministry and recommending a national mega event. The assembly that was divided into six groups presented its own findings. No decisions or proposals were made at the national level.

The assembly preferred to take these proposals back to the provinces and set its own priorities. Fr. George Maliekal, the Provincial of Shillong, representing the SPCSA for Youth Ministry, concluded this part of the meeting with words of high appreciation for the work done by the Youth Ministry Team at the national level led by Fr. Maria Charles. He further said, “We can do more. We can do more effectively,qualitatively and quantitatively”.
He then reminded the assembly, “Youth ministry is the birth mark of the Salesians. Let us do it well”.

Youth Ministry and Family: Animation by Fr. Fabio and Team 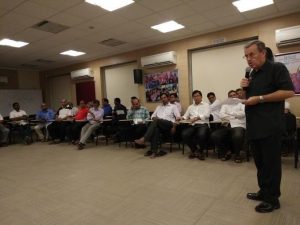 A three day animation of fifty five Salesians was organized by the Youth Ministry National Team of South Asia under the leadership of Fr. Maria Charles at the Salesian Provincial house, Mumbai, from 1-3 of November 2016 targeting the same group gathered for the strategic planning of Salesian Youth Ministry. Fr. Fabio Attard, the General Councillor for Youth Ministry and his team member, Fr. Patrick were the resource persons for the programme.

The animation programme was the second part of the national meeting of the Youth Pastoral Teams of the region. The day began with Lectio Divina which placed the participants in a spiritual space to enter into the Eucharist where the Lectio Divin a found its final moment in personal self-offering and sharing in microgroups. 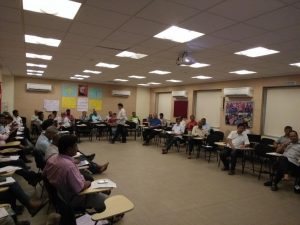 In the initial session Fr. Fabio spoke of the importance of the Youth Pastoral Team in the province. Referring to the need of equipping the Youth Pastoral Delegates of the Provinces he presented the first timer, “Youth Ministry School” organized in the Generalate, a moment of intense study of “Salesian Youth Ministry – Frame of Reference” (FoR) for the congregation for its mission to the young.

There was also time set aside to share the experience of each province in disseminating the FoR to Salesians, Youth Pastoral Teams, Provincial Councillors and other groups. 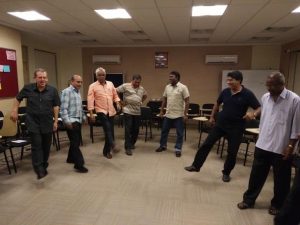 The intellectual intensity of the sessions was supplemented with family moments, the best expression of which was the football game after dinner where even Fr. Fabio could not resist from finding himself in the position of striker. Naturally “Boogie, Boogie” too found its place making the day long concentrated work a little light. Fr. Fabio dwelt intensely on the FoR, proposing ways and means to take forward this great tool at hand. He insisted that the Youth Pastoral Team of the province must be familiar with For, know the content of it, and as a team find time to reflect, pray and listen. It is also equally important, he said, to set in motion processes giving space for people to discuss, share, involve and even to object. Taking further his proposal he invited the Youth Pastoral Teams to work with rectors, commissions and formation personnel.

Fr. Patrick presented the making of the Youth Ministry Manual, a handbook in preparation by Fr. Fabio’s team to assist Youth Pastoral Delegates of the provinces to have certain common criteria of engaging everyone involved in the mission to the young. He presented the dynamics of the preparation of manual and suggested that the province teams be actively involved by way of making proposals in compilingit.

The next part of the animation took the participants to see for themselves the need to bring family into the Salesian youth ministry. Fr. Fabio led the group to see how family becomes an integral part of the youth ministry and hence it has to find its place in SEPP and OPP. He led the participants through group sharing to focus on the challenges that families face today. The findings of the group were brought to the assembly where he appealed to the emotional response of the participants to the current scenario of the family and how one can respond toit.

As a response to the present challenges faced by families Fr. Fabio presented Amoris Laetitia from a Salesian perspective, linking its proposals and guidance to a pattern seen since the Vatican II. The pattern consists in the process of documentary guidance and its consequent three moments of foci on family through three separate documents: Family and marriage in Gaudium et spes, Familiar is Consortio,
and Amoris Laetitie. In situating Amoris Laetitia within the response of the Church in the past fifty years he brilliantly showed how it is closely linked to the present challenges and needs of the family.

Presenting the salient points of Amoris LaetitieFr. Fabio paused at certain chapters looking at it from a Salesian perspective and providing possibilities for a Salesian reading of these sections. He insisted that Amoris Laetitiehas not changed the doctrinal teaching of the church, but is asking for an attitudinal change. To give a realistic approach to the proposal of Pope Francis, Fr. Fabio shared his own personal experience of spiritual accompaniment of couples engaged in same sex marriage. He was sowing seeds of hope that the proposal of the Pope in Amoris Laetitieis not a utopia but a possibility. 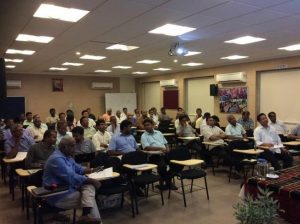 On the last day the participants were involved in finding a road map by looking at some concerns based on three questions proposed by Fr. Fabio concerning the model presented by Pope Francis and its interpretation in Salesian Youth Ministry, the blocks and difficulties encountered in daily pastoral ministry and the urgent pastoral needs in Salesian presences.Byway of concluding the animation Fr. Fabio proposed certain practical guidelines to the participants as how to take forward the fruit of the animation to the provinces. Appreciating the intense participation of the members his final words were, “Your province is the place of the commitment and hence we do not have commitments here. Here we do not decide on pastoral objectives.Youneed your provincial team to make that commitment. I encourage you; I open the mind for it is within the provinces that processes areinitiated.” 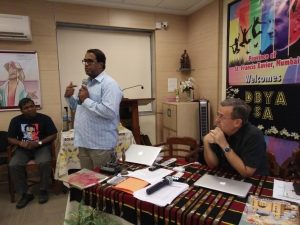 The three day programme came to a conclusion with the words of appreciation extended by Fr. Maria Charles to Frs. Fabio and Patrick. He said, “I appreciate in Fr. Fabio his commitment to Youth Ministry, his ability to communicate and animate people.” As he thanked the participants he also said, “We have a process in place and we need to learn how to make this process known”. Before the assembly dispersed Fr. Fabio released the Youth Ministry Report
of the year 2015-16. As the evaluation was in progress everyone had words of appreciation for the wonderful Salesian family environment created by Fr. Glenford Lowe and his team.

Be Passionate - Youth are the Salesian’s - Youth Services